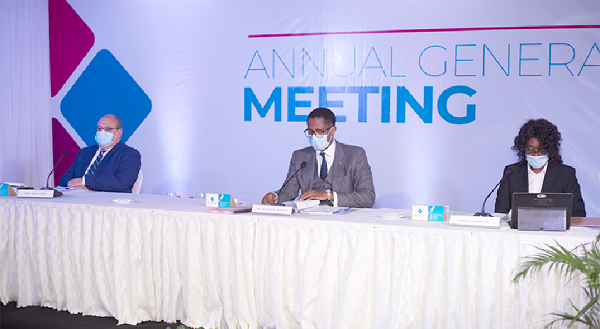 Republic Bank Ghana Group posted a much-better-than expected results for 2019 with profit after tax jumping by 180.6 per cent to GH¢ 79.1 million.
This marks a significant jump from the previous year ‘s figure of GH¢ 28.2 million.
The Board Chairman of the bank, Mr Charles William Zwennes, who disclosed this at the 29th annual general meeting (AGM) of the bank in Accra last week, said the financial performance demonstrated a healthy improvement over last year’s performance amid a challenging financial environment.
In spite of the performance, the bank did not declare any dividend.
Mr Zwennes explained that the bank was aware of the importance of dividends, and in furtherance of this, it had increased profitability and shareholders value.
“Unfortunately, the increase in profitability was not enough to reduce the debit balance in the income balance in the income surplus account, therefore we are unable to pay dividend this year.
“Despite the provisions in the Companies Act restricting the payment of dividend, the group is charting the right path and the board and management of your bank are determined and focused to delivering valued results to you, cherished stakeholders,” he noted.
Asset base
The bank’s total assets also increased from GH¢2.88 billion in 2018 to GHC 3.34 billion in 2019 representing an increase of 16.2 per cent.
According to the Managing Director of the bank, Mr Farid Antar, reducing the non-performing loan (NPL) portfolio remained critical to the banking industry.
He added that progress has been made by the overall industry in improving the NPL ratio.
NPL ratio he said improved from 20.79 per cent in 2018 to 18.16 per cent in 2019.
“The impairment charge in 2019 also reduced from last year’s charge of GHC 57.7 million to GH¢19.1 million. Overall, provision for loan impairments for the year amounted to GHC 132.2 million, producing an NPL coverage ratio of 47.2 per cent against a ratio of 47.3 per cent in 2018,” Mr Antar stated.
Customer deposit
He said industry deposits witnessed a healthy year-on-year growth of 22.2 per cent which was an improvement over the 17.3 per cent growth experienced in 2018.
The bank’s deposit mobilisation efforts also remained strong and contributed to a year-on-year growth in customer deposits by 16.4 per cent from GH¢2.16 billion in 2018 to GH¢2.52 billion in 2019.
“Initiatives that were instrumental in the deposit performance results include: the ‘One Campaign Reloaded’ that was launched to drive the reactivation of dormant accounts and to increase awareness and visibility of the bank; as well as deposit scheme partnerships with key institutions that have proved resoundingly successful,” he noted.
Outlook
Mr Antar said: “With cognisance to the ever-evolving banking environment influenced by technology and the COVID-19 pandemic, the bank continues to pursue initiatives to ensure that our services remain relevant and solidify the bank’s performance gains in an increasingly competitive industry.”
He said the year 2020 would see the bank reengineer its processes and operations to meet the emerging needs of the market.
Support for customers amid COVID-19
He said the bank introduced a number of interventions to support customers and ease the impact of COVID-19 on their operations.
These interventions include a six-month moratorium on all loan repayment up to two per cent reduction in lending rates, three months automatic waiver on excess and late fees and a waiver of interbank or cross wallet transfer chargers.
He added that other interventions including debt restructuring and temporary increases in overdraft were offered to customers following the appropriate needs assessment.
“Republic Bank (Ghana) Group was 14.0 per cent above its year-end profit target and continues to demonstrate improvement in key areas such as operational efficiency and asset quality,” he noted.