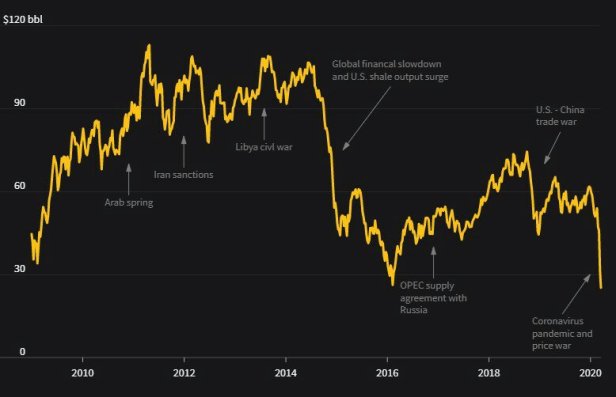 Oil tumbled to an 18-year low as coronavirus lockdowns cascaded through the world’s largest economies, leaving the market overwhelmed by cratering demand and a ballooning surplus.

Futures in London plunged by 9% to the lowest level since March 2002, while New York crude dipped below
a barrel before settling just above that level. While U.S. President Donald Trump spoke with Russian counterpart Vladimir Putin Monday to discuss the importance of stable energy markets, that did little to stanch the decline.

A huge oversupply is further
collapsing the oil market’s structure, and there may be more weakness to come as the world quickly runs out of storage capacity. The slump in demand has shut refineries from South Africa to
Canada, leading to excess barrels in the market.

At the key storage hub of Cushing, Oklahoma, inventories are said to have ballooned by more than 4 million barrels last week, according to traders with knowledge of Genscape data, raising fears about storage capacity limits being reached.

“We’re grinding lower here and we’ll continue to get lower as runs get cut globally,” said John Kilduff, a partner at Again Capital LLC, a New York hedge fund focused on energy. “As we see specific points like Cushing near its limits, it’s just going to put greater and greater pressure on the price till we get to a clearing point.”

Prices are on track for the worst quarter on record. Goldman Sachs Group Inc. estimates consumption will drop by 26 million barrels a day this week as measures to contain the coronavirus hurt global GDP.

Consultant FGE estimated that refinery operating rates have been cut by over 5 million barrels a day worldwide, and could bottom out at between 15 million and 20 million lower.
Meanwhile, Riyadh and Moscow are showing no signs of a detente in their supply battle as Saudi Arabia announced plans to increase its oil exports in the coming months.

*Front-month futures are poised for a plunge of over 65% this quarter, their worst ever.

In the market for physical barrels of crude, prices are already far below those of futures benchmarks. Oil from Canada touched a record low of
, while many other key grades are trading below a barrel, with some as low as just .

It’s a similar picture in Europe, where
Kazakh crude was offered at a 10-year low. The six-month contango on the global Brent benchmark has grown bigger than in the financial crisis, at more than a barrel. The equivalent six-month contango for WTI is about .

The plunge in prices has caused distress in some OPEC nations. Algeria, which holds the cartel’s rotating presidency, urged the secretariat to convene a panel but the call has failed to gather the majority backing necessary to go ahead. Riyadh is among those opposing the idea.

(By Catherine Ngai and Alex Longley)