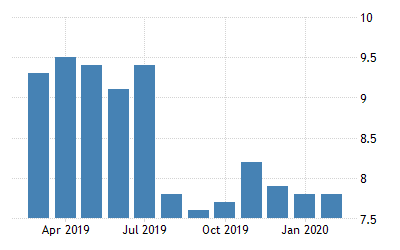 Inflation remained unchanged at 7.8% in February 2020, according to the latest figures released by the Ghana Statistical Service (GSS).
This continued the trend of a stable inflation of about 8% recorded over the past six months.

According to the GSS, food is still the main driver of inflation in Ghana, even though there are four divisions with higher inflation rates.
Compared to January 2020, there was a shift in the inflation for the Housing, Water, Electricity and Gas Division, from 7.6% to 6.3%.

For the non-food inflation, Alcoholic Beverages, Tobacco and Narcotics (11.6%); Transport (9.9%); and Recreation (9.0%) and Clothing and Footwear were the divisions with the highest rates of inflation.
For food inflation, price levels of Vegetables; Fruits and Nuts, Cocoa Drinks were higher than its average of 7.9%.