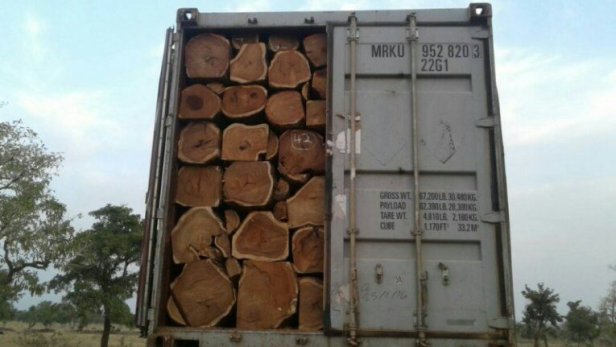 Ghana exported a total volume of 216,631 cubic metres of wood products accruing some $123 million as at the end of September 2019, the Forestry Commission of Ghana has stated.

Chief Executive Officer (CEO) of the Forestry Commission, Kwadwo Owusu Afriyie who briefed the Board and staff of the commission at the end of year meeting, indicated that the Asia/Far East market recorded 73% of the Ghana’s export and emerged the largest market, with leading species trading in these markets including Teak, Wawa, Potrodom and Senya.

The GFPS has an annual target of 25,000 hectares which is to be executed by both the public and private sectors.

He noted that at the end of planting activities in October this year, a total area of 26,865 hectares has been covered – the first time since the implementation of the GFPS that the annual target has been exceeded.

Furthermore, a reported area of 4,490 hectares of enrichment planting was undertaken within partly degraded forest reserves out of an annual target of 5,000 hactares.
“This activity was undertaken solely under the Youth in Afforestation/ Reforestation Project (YAP)”, he added.

Additionally, maintenance of over 10,000 hactares of existing plantations was undertaken mainly in Bono, Bono East and Ahafo, Western and Western North Regions under the FIP over the period under review.

The Chief Executive indicated further that the forestry sector continues to operate in the legality assurance environment that was introduced some few years ago adding that the field verification audit of the Divisions and Departments as well as the private timber operators is now fully operational.

“The operation of the wood tracking system has also entered into a new phase with the introduction of a modified version, incorporating enhancements that now resolve shortfalls of the old version of the system.

These enhancements now enable us to effectively track plantation timber transactions as well as timber allocation that relates to instances of evacuation of already felled trees such as in the case of Potrodom and Rosewood. These new enhancements will make it possible to issue timber legality licenses to cover these sources of timber”, he added

He noted further noted that a step towards completing the commission’s readiness to go live with its licensing system are far advanced in the process of converting leases and permits into small and large scale timber utilization permits.

“The first batch of application has already gone through the full internal administrative processes and is ready for submission to the honourable Minister.

The final stage of the conversion process will be for Parliament to ratify the leases once the Honourable Minister has signed them off”, he added.

Mr Owusu Afriyie noted that Commission had also made some great inroads in solving youth unemployment in the country. He noted that a total of 83,000 persons were directly engaged under this year’s forest plantation programme.

The Chief Executive Officer also noted that Food crop production in Modified Taungya System sites within forest reserves contributed significantly to food security in Ghana he added that a total of 25,655 metric tonnes of food crops comprising maize, plantain, cocoyam, yam, cereals, legumes and vegetables were produced within the period.

To combat the increasing spate of illegal logging, mining, farming and other illegal activities in the country’s forest reserves and wildlife protected areas, Mr Owusu Afriyie said the Commission has sought approval from the Public Procurement Authority to procure 1,000 arms and ammunitions for Forest and Wildlife Guards to aid effective patrolling of our forest and wildlife estates.

He added that in spite of the efforts of the Forest and Wildlife Guards as well as that of the Rapid Response Teams and the National Task Force (Military and Forestry Commission Staff), illegalities continued across the nation’s forest and wildlife protected areas.

The Chief Executive officer used the occasion to thank the staff and Board for their selfless contributions to the success of activities and programmes of the Commission.