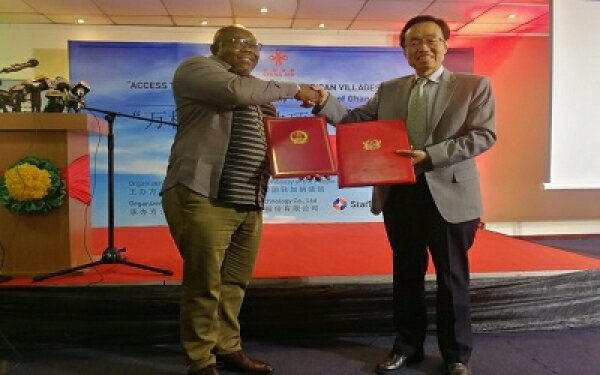 The Chinese Embassy in Ghana, together with project implementers StarTimes Group, have handed over the ‘Access to Satellite TV for 10,000 African Villages’ project to the Ghanaian government after enabling 300 communities in rural Ghana have access to local and international TV content.

Giving the background about the project at the handing-over ceremony, a Deputy Minister of Communication, Mr George Andah, said in 2015, China and 50 African countries and the African Union Commission convened in Johannesburg, South Africa, for a summit on China-Africa Co-operation to consolidate solidarity and co-operation among China and Africa.

At the summit, the Chinese government indicated its willingness to implement 10 major China-Africa co-operation plans within 50 African countries. One of the plans was the provision of a grant for access to satellite TV for 10,000 African communities, of which Ghana was a beneficiary.

He explained that the project is aimed at bridging the digital divide and ensuring that all citizens, especially the rural communities, enjoy the full benefits of digitalisation.
Mr George Andah, receiving the equipment in Accra, said the ceremony signified the strengthening of the ties between Ghana and the People’s Republic of China.

He noted the Satellite TV Project for rural Ghana dwellers strengthens ties between Ghana and China.
He praised the personal intervention of the Chinese Ambassador to Ghana, Shi Ting Wang, who ensured the project did not face crippling challenges.

It emerged 6,000 households will have access to both local and international content, breathing some colour into the lives of the rural folks.
“Timely access to information is critical and access to satellite TV is a notable way of information dissemination irrespective of distance,” the Minister noted.

He said while government works on enhancing Ghana’s satellite infrastructure to make it easier for local content producers to have their work available to citizens at reasonable prices while getting their works exposed to a global audience, the StarTimes Project bridging the digital divide was also welcome.
The Awutu Senya West Constituency MP also urged beneficiary communities to ensure equipment installed in the public areas are well maintained.

China’s Ambassador to Ghana, Shi Ting Wang stated that the satellite TV system installed in the 300 remote communities will make them enjoy clear TV signal, thanking the Communication Ministry for their support in rolling out the project.
“The 21st century is an era of Information Technology.

People have the right to enjoy free information flow. Some people in China and Ghana still suffer from the digital divide, but with this project, we hope to bridge the divide,” the ambassador rendered.
He held that the Ghana-China Cultural Exchange was key, especially when China has become a key economic partner in many Africa states, including Ghana.

StarTimes Group Vice-President, Eric Xue mentioned that the 300 beneficiary communities were carefully selected with the Communication Ministry, adding that the company trained locals in the area of dish fixing while offering solar-powered batteries and other accessories.
The communities, he said, can enjoy 20 channels for free for six months, including the Adepa Channel. Others are movie, news, music, and sports channels.

A StarTimes documentary screened showed how secondary school pupils get to absorb knowledge in the field of English, Science, Mathematics and Technology through the Mindset Channel