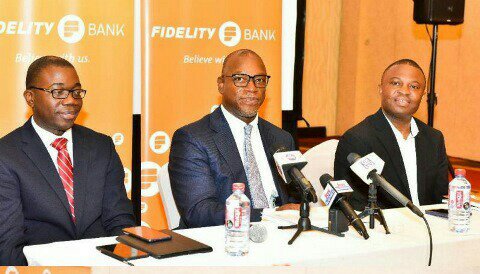 Mr Edward Effah, the Board Chairman of the Fidelity Bank, said despite the financial turbulence that hit the banking sector in 2018, the year was rewarding for the Bank.
It recorded an end-of-year profit before tax of GH¢242 million, a rise of 79 per cent, representing a significant growth from the GH¢135 million recorded in 2017.

Mr Effah said the feat, among others, was due to lower provisioning for impairment, lower funding costs, and improved interest margins.
The Bank’s deposit base also increased by 13 per cent to GH¢4.5 billion buoyed by its innovative deposit mobilisation campaigns such as the “Switch and Smile” and transaction floats, Mr Effah said.

Addressing the media at the 2018 Annual General Meeting in Accra on Friday, Mr Effah said the Bank continued with its stated vision of creating value for all stakeholders by recording a notable performance in 2018 in relation to 2017 on a number of key performance indicators.
He said it recorded a 30 per cent growth in total assets, moving from GH¢5.4 billion in 2017 to a little over GH¢7.0 billion.
Operating income increased to GHC690 million from GH¢523 million in 2017, representing a 32 per cent growth.

On the Banks dividends, Mr Effah said the Board had proposed a dividend of GH¢1.28 per share for the year, which represented a growth of 83 per cent from the 2017 dividend payment of GH¢0.70 per share.
He stated that Mr Julien K. Opuni, who was the former Deputy Managing Director of the Bank, was appointed as the new Managing Director with effect from November 2018, to lead in attaining new height, thus, replacing Mr Jim Baiden, the former MD, who went on retirement.

The Bank also made other critical appointments within its Retail Ranking Division, to help it remain relevant, profitable and be able to take a bigger stake in the retail markets.

A new business unit, which was the Wholesale Banking Group, was also created within the year to enable it improve the coordination of client coverage and product delivery to valued clients in the corporate and investment banking space.

Mr Effah said the Bank also introduced new products such as the Fidelity Easy Save Account, while the Fidelity Mobile App was also enhanced with new card and cheque services, and international transfer services to drive uptake of the electronic banking products across all segments of the market.

Mr Opuni, on his part, said amidst all the challenges 2018 presented, the Bank came out bigger and better.
He said the 2018 financial year closed with significant improvements in the Bank’s performance over the 2017 financial results.

He said in the 2019 financial year, the Bank had begun its journey to achieving a reinforced mission of becoming “an established top three bank in Ghana by 2021 based on all key performance indicators.”

He said that vision would be driven through the achievement of the best digital presences with a people centred approach to product delivery, perfecting its strategic funding drive with a focus on best pricing and low risk.

It would also reinforce its position as a market intermediator strategically leveraging long and short-term instruments, to achieve the vision.
“We enter 2019 with clear strategy, an increasingly powerful brand and a strong Balance Sheet, which places us in a good position for another great year ahead,” Mr Opuni said.