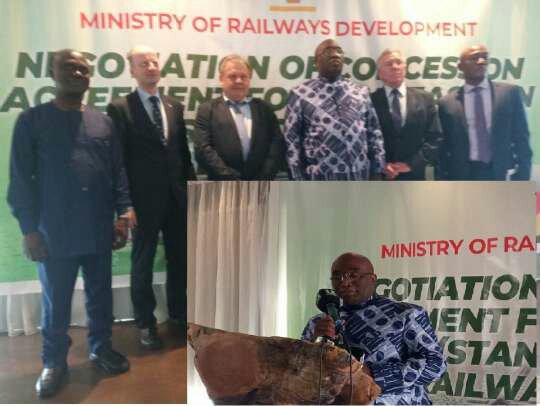 The Ministry of Railways Development has reached a Concession Agreement with the Ghana European Railway Consortium (GERC) for the construction of the Eastern Railway line project at the cost of $2.2 billion dollars.

The 340 kilometre- Project, which would run from the Tema Port through Accra, Koforidua and end in Kumasi; is a Built, Operate and Transfer (BOT) project, with the Government having a 30 per cent share.
It would take three years to complete the project; upon which GERC would then operate it for 27 years before handing over to the Government.

The project would have a branch line at Bosuso to Kyebi in the Eastern Region to the proposed bauxite mines in the area, and it would also be linked up to the inland port at Boankra in the Ashanti Region.

The negotiations for a new standard gauge Eastern Railway lines was reached, on Thursday, at Peduase in the Akuapem South District of the Eastern Region between Mr Joe Ghartey, Minister of Railways Development and Mr Heinz Kroczek, GERC representative.
GERC is made up of 16 investment companies from Ghana, Germany, Austria, France and Italy.

Some of the companies are the Keteke Group (Ghana), ARISU (Germany), Ralf Bankenbach (Germany), Havellandische Eisenbahn (Germany), Voestalpine (Austria), IPIMED (France) and Salcef (Italy)
Under the project, GERC proposes to build a double line railroad with maintenance roads on each side and it would also have fencing on each side to protect the rail lines.

The system would consist of three major stations in Accra, Koforidua and Kumasi; with additional 30 minor stations ad stopping points along the line.

The entire rail line would be electrified, thus the locomotives and coaches would be electric, the first in the country.
GERC would also build a sleeper factory in the country, which would have the capacity to produce over 1,000 sleepers per day, with the factory employing 550 full time workers.

Mr Ghartey said the outcome of the negotiations would be taken to Cabinet for approval, after which it would be placed before Parliament.
He said in 1898, it took five years for rail to be constructed from Takoradi to Kumasi, however, in today’s era of technology, he was hopeful that the single line would reach Kumasi by the end of 2020.

The Project, is the first of its kind in magnitude, to be executed under BOT in sub-Saharan Africa.
Mr Kroczek, who is also the Chief Executive Officer, Project Development in Africa, said the funds for the project were from the Government of Germany.

They would cover the entire technical infrastructure, electrification, stations and rolling stock, among others.
Mr Kroczek said they were committed to ensuring that the project remained a shining example of the Ghana-Germany Corporation.

Professor George Gyan-Baffour, Minister of Planning, said the Government’s policy objective for railway development was to systematically develop the overall national rail network and expand the capacity to support industrialisation and economic activities across the country.
This would ensure the integration of rail transport with other modes of transportation in a bid to secure a more sustainable transport system.

Mr Kwaku Agyenim Boateng, a Deputy Minister of Railways Development, who gave an overview of the Project, said during the construction phase, 1,000 to 5,000 jobs would be created through construction firms, architects and other service providers.

The train operations and management would employ in excess of one 1,000 personnel.
Upon completion, the train passenger movement per day would be from 12,000 and18,000 while the freight movement is projected to be four million metric tonnes per year.

“GERC believes that the construction and operations of the Eastern Railway line is a game changer for Ghana,” Mr Agyenim – Boateng, stated. “The benefits that will accrue from the project are projected to increase the country’s Gross Domestic Products (GDP) by at least 1.5 per cent per year”..