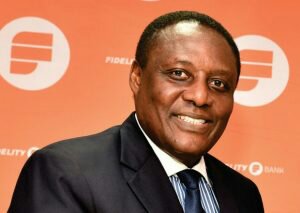 The Managing Director of Fidelity Bank Mr.Jim Baiden has announced his retirement from the bank.

Confirming his retirement to Citi Business News, Mr. Baiden stated that he officially retired from Fidelity Bank on Friday October 26 2018.

Mr. Baiden has been in the banking industry for about three decades.
According to the bank’s website, Jim Baiden was a Co-founder of Fidelity Bank and a member of the Bank’s 3 member Executive Directors team on the Board.

Jim currently had oversight responsibilities for the Consumer Banking strategy of the Bank as well as Customer Care, Brand and Corporate Communications, and worked with a great team to create a world class financial institution.

As Chairman of the Bank’s Assets, Liability Committee, ALCO, Jim had ultimate responsibility of the liquidity policy and Balance Sheet strategy of the Bank.

As a key member of the start-up team of Fidelity Discount House in 1998, Jim served as General Manager, running the day-to-day dealing room operations of the Company.

In 2002 he was appointed Executive Director to the Board of the Discount House and worked assiduously with the management team that crafted the transition of this highly successful Money Market Intermediary to become a fully-fledged Bank in 2006.
Jim brought to Fidelity over 25 years of core banking experience and specialist knowledge in Treasury and Commercial banking.

He launched his banking career in the mid-80s at National Investment Bank where he managed various portfolios at the Branch and Head-Office levels.
He subsequently joined the start-up team of the then Securities Discount House in 1990 and rose to become the Chief Dealer and established a reputation as one of the best dealers on the Money Markets.

Jim has gained extensive international experience as an alumnus of Gerald & National a leading Money Market Intermediary in the City of London in the 1990s and the Darden School of Management, University of Virginia, USA.

Jim also holds a Master’s Degree in Banking & Finance from Finafrica Foundation, Italy as well as a Bachelor’s degree in Economics with Statistics from the University of Ghana, Legon.

Jim serves on a number of Boards including Stallion Trust & Administration. He is the Chairman of the Action Chapel Scholarship Foundation.