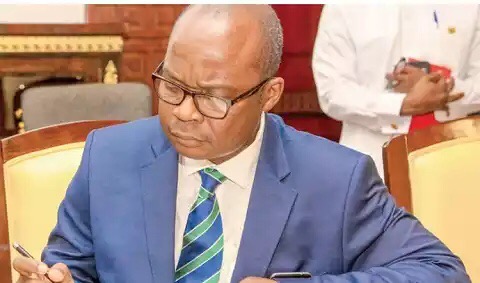 The Bank of Ghana (BoG) has directed banks with minimum capital below industry levels to, as a matter of urgency, submit to the central bank comprehensive recapitalization plans.

This is to strengthen the financial sector, enhance the central bank’s supervisory role and put the real economy on a sound footing.

The Governor of the BoG, Dr Ernest Addison, said in an interview with the Graphic Business on the sidelines of the ongoing Spring Meetings of the International Monetary Fund (IMF) and the World Bank in Washington, DC, that the central bank was eagerly awaiting the recapitalisation plans of the banks.

“On the basis of the plans to be submitted by the banks, some major decisions will be taken. Those plans will have to be credible and should be convincing enough to stand the test of time,” he said.

The IMF had already asked the BoG to ensure that banks with shortfalls in minimum capital prepared “credible and time-bound recapitalisation plans” that would serve as blueprints for the strict rebasement of their capital reserves.

Banks in Ghana continue to benefit from strong and stable deposit inflows, with deposits making up 73 per cent of total liabilities.

The IMF said in its staff statement of the 2017 Article IV Consultation Mission for the fourth review under the extended credit facility that failure to do that would adversely impact credit and the real economy and financial deepening and ultimately lead to quasi-fiscal costs to the BoG.

Asset risk for banks in the country is expected to remain high over the months, with non-performing loans rising to 17.4 per cent of total lending in December 2016, from 14.7 per cent in December 2015.

The directive for clear recapitalisation plans by the BoG is, therefore, seen as a major attempt to bolster investor confidence in the banking sector.

Stricter loan reclassification following the BoG’s 2015 asset quality review, coupled with the country’s general economic slowdown in the past two years, also contributed to the increase in problem loans.
It is, however, expected that there will be a gradual improvement in the non-performing loan ratio as economic growth accelerates.
Analysts expect a recovery in economic activity, with a GDP growth of 6.5 per cent in 2017, compared with the annual growth of around four per cent in 2014-2016.
The Governor, who doubles as the Chairman of the Monetary Policy Committee of the central bank, is hopeful about an improvement in the asset quality of the banking sector as the government addresses large debts at state-owned enterprises which have generally been subject to weak monitoring, reporting and oversight.

Capital buffers and strong earnings provide some loss-absorbing capacity against weak asset quality but are also under some pressure.
Capital buffers, with a capital adequacy ratio of 17.6 per cent as of December 2016, and bank capital-to-assets of 14.1 per cent as of June 2016, are in line with peers but are potentially under pressure from the need to increase provisioning levels.
Profitability is also strong, but has been on a declining trend and analysts expect return on assets and return on equity to remain broadly stable at around four per cent and 20 per cent, respectively, in 2017