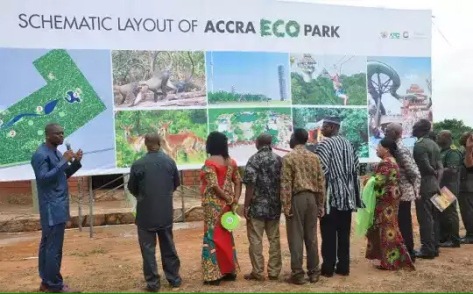 The construction of the $1.2 billion Accra Eco park is underway, following a sod cutting ceremony to signal the beginning of the project.
The ecotourism project, to be done in phases, is being undertaken by the Forestry Commission and its private partner, Aikan Capital Limited and is scheduled for completion between the next five and seven years.

The first phase of the project is expected to be completed in 24 months.

President John Dramani Mahama, in a speech read on his behalf, said government had decided to convert the Achimota Forest into a world-class recreational facility and a major tourism destination in West Africa rather than allow further encroachment and dumping of waste into the forest.

“This development will preserve the only green belt in Accra, and allow the forest to continue to function as a carbon sink and clean the air and at the same time create jobs and business opportunities for the private sector,” he said.

The project involves the construction of amusement parks, orchards, arboretum, wildlife safaris, museums, eco-commercial enclaves and eco-lodges but with little disruption in the natural vegetation as possible.

It will also have a spiritual enclave to cater for spiritual/worship activities that bring more than 180,000 people annually to the Achimota Forest.

There are also plans for high seating capacity conference rooms to be sited outside the main forest area.

Nii Osah Mills, the Minister of Lands and Natural Resources, said the Achimota Forest Reserve had long been recognised as having outstanding potential for tourism development, considering its location in the city.

“The Accra Eco-Park development has, therefore, been conceived to provide a unique opportunity to demonstrate to the business community and the public that ecotourism is a viable, environmentally friendly, employment-creating, sustainable income-generating venture,” he stated.

It will add to the country’s major national parks—Kakum in the Central Region and Mole in the Northern Region.

Mr Samuel Afari Dartey, the Chief Executive of the Forestry Commission, said there was the need to undertake innovative ecotourism development as a means to safeguard the ecological integrity of the forest.

He said the Eco-Park Project will target about 2 per cent of all visitors to West Africa Sub-region, attracting more than 600,000 visitors to the Accra Eco-Park annually.

The project will create more than 4,000 jobs during the construction phase and about 2,500 direct jobs during the implementation phase, he said, adding that the Forestry Commission would receive about 20 per cent of revenue generated.

In addition, the Government of Ghana will receive revenue in the form of corporate taxes, PAYE and social security payments (SSNIT) and other indirect taxes.

For the private sector numerous business opportunities will be created thus enhancing the contribution of the forestry sector to national development.

The lease agreement allows Aikan Capital to design, build and operate the facility for 10 years.

One thought on “Work begins on US$1.2 billion Accra Eco Park; scheduled for completion between 5 to 7 years.”